Many diseases long since eradicated could wipe out entire villages in the days before widespread vaccinations. Like many towns of the day, Hardwick established so-called “pest houses” to isolate the sick from the rest of the town to avoid disaster. This is the story of how a now-eradicated virus terrorized the booming village of Hardwick, a bustling center for granite finishing and commerce, at the turn of the century.

The Hardwick Smallpox Outbreak of 1900

In 1900, smallpox terrorized the world with its brutal efficiency. A smallpox vaccine had existed for nearly a century, but very few had taken it. In sparsely populated states like Vermont it was even less common. Panic struck Hardwick in 1900 when an outbreak of smallpox struck the town.

On May 31st of 1900, the Hardwick Gazette reports that a town resident originally thought to have smallpox in fact had chickenpox, according to the State Board of Health’s Dr. Hamilton.  According to accounts in the Hardwick Gazette, village residents breathed a sigh of relief at the news. It was to be short-lived.

On August 2, 1900, the State Board of Health realized its major mistake. 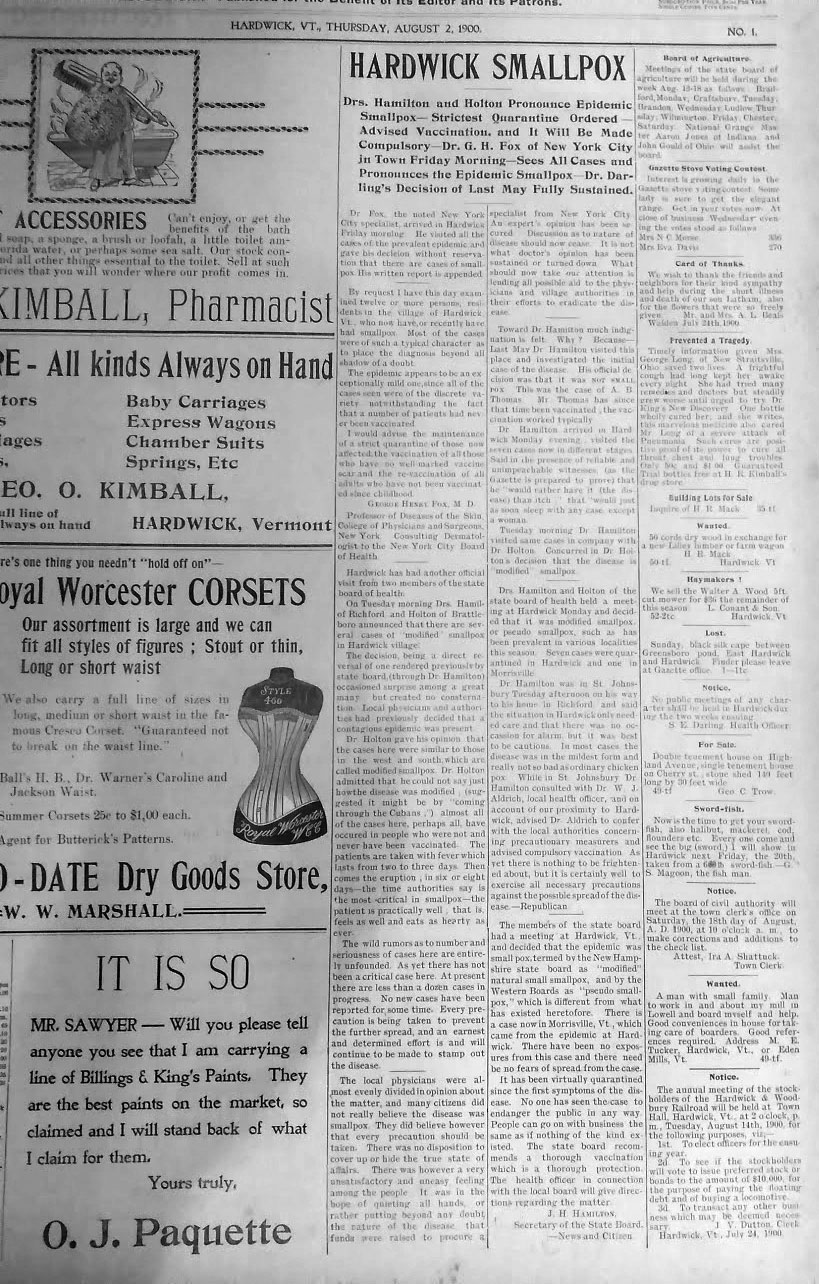 They referred to it as “modified” smallpox and speculated it had something to with “Cubans.” The Gazette and the residents of Hardwick did not respond kindly to Dr. Hamilton reversing his decision. A correct diagnosis the first time could have meant no outbreak took place.

The Hardwick Gazette comments that they established a “Pest House” to quarantine the individuals afflicted with smallpox. 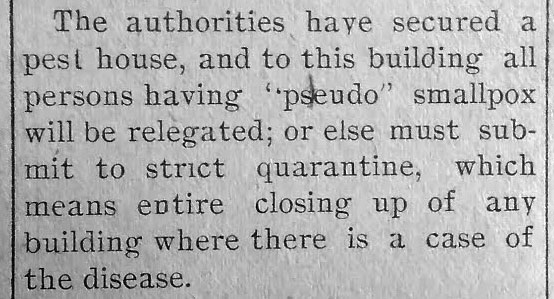 Another reference to the “Pest House” describes the Pest House as “about a mile from the village.”

In the end, the smallpox outbreak of 1900 sickened thirty-four people, but resulted in no deaths. The outbreak’s most damaging effects were psychological and financial. The original scare in May had been bad enough.

The Hardwick Gazette reports “A conservative estimate of the amount of damage already done to the business of Hardwick by the small-pox scare is placed at $10000”.

An August 9th article in the Gazette says “there is much less scare in Hardwick than out of it.”

At the height of the scare, the bank and post office fumigated mail and bills. Town officials called off public meetings and church gatherings. Numerous articles (and advertisements) in the Gazette assured readers that Hardwick was safe. 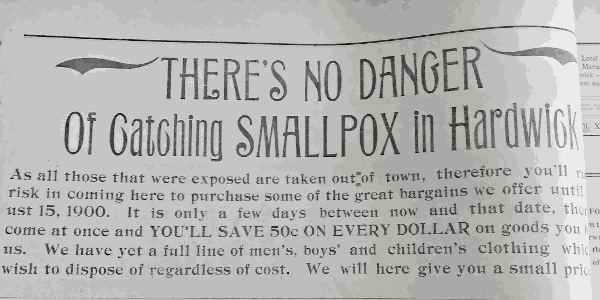 Hardwick’s last reported case of smallpox was August 16th, 1900. On September 24th, the authorities shut down the Pest House with no small amount of enthusiasm.

Is it the Pest House?

Trails members discovered a ruined foundation in the course of clearing the Wayne’s Way trail. Is this the remains of the Hardwick Pest House? That may be a question whose final answer is lost to history. Some people whose memories stretch back that far swear that it is.  The foundation appears to be the ruins of Silas Woodbury’s farm, based on 1875 maps. Mr. Woodbury died in the 1880s. Some references to the Pest House refer to it simply as “the Farm.” Based on maps of the time, this means that the most likely location of the “Pest House” could well be that ruined foundation.

If you’re looking to explore the ruins, they’re just by the Hardwick Lake at the end of Wayne’s Way.